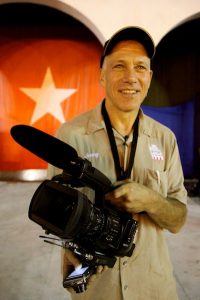 Alpert has won 11 Emmy Awards for News and Documentary Programs and one National Emmy for Sports Documentary. Over the past 30 years, he has consistently gained access to behind-the-scenes events of historical significance and interviewed world leaders when other reporters were not allowed. After the Vietnam War, he was part of the first American television crew to film in Vietnam. When Fidel Castro came to address the United Nations in 1979, Alpert and his team were the only non-Cubans allowed access to Castro. After the Gulf War, he was the only reporter to have interviewed Saddam Hussein. More than a hundred of his reports from Vietnam, Cuba, the former Soviet Union, China, Nicaragua, Korea, Afghanistan, Iraq and all parts of the U.S. have been widely broadcast on NBC, ABC, CBS, HBO, PBS, ESPN, Canadian and Japanese major networks. Alpert is the co-founder and co-director of the Downtown Community Television Center, America’s largest and most honored non-profit community media center.

People with disabilities are the largest minority in the United States and in Russia with 57 million Americans and 13 million Russians living with a disability. Most of us will become disabled at some point in our lives. Still, disabled people continue to be underrepresented or stereotyped in media. All For One: Media Enabled Musketeers puts cameras directly in the hands of people with disabilities, letting them tell their own stories. Like the characters in the famous Dumas novel, those in All For One worked together for the common good, wielding cameras for sabers.