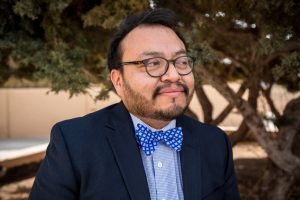 Moroni Benally started the Evans School Ph.D. program in 2008. His research interests include policy making in native communities, decision-making, culturally appropriate methods of policy analysis, and co-option in collaborative settings. Prior to starting his doctoral studies, Moroni earned his undergraduate degree in International Relations with an emphasis in Comparative International Political Economy from Stanford University and his Master of Public Policy with an emphasis in Social and Economic Policy from Brigham Young University.

Moroni previously worked as a Policy Analyst and then a Research Fellow at the Diné Policy Institute, designing and implementing large-scale studies on Navajo Nation legislative and policy processes. As a Tax Commissioner for the Navajo Nation Tax Commission, Moroni evaluated sources of revenue and made recommendations on tax policy, ultimately leading to the implementation of a new tax policy that raised an additional $1.5 million in revenue. Moroni taught in the Master of Public Administration and Tribal Governance Programs at The Evergreen State College in Olympia, Washington. He also served as the Executive Director for the Navajo Nation Division of Natural Resources, managing the protection and conservation of the Navajo Nation’s natural and cultural resources.

Every four years, the Navajo Nation elects its president, whom many consider the most powerful Native American. Moroni Benally, a witty LGBTQ candidate with radical ideas, hopes to defeat the incumbent president. Fraught with challenges, Moroni soon discovers that theory and a platform does not necessarily prepare you for the daily dirt of politics and the unpredictability of voter’s choice.