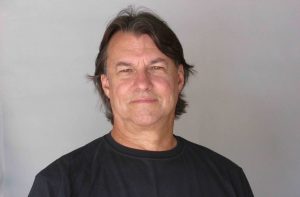 Layton Blaylock is an award winning documentarian, director, and director of photography. His feature documentary “Art From the Streets” was accepted at over 30 film festivals around the world garnering 10 awards including 5 for Best Documentary. Blaylock is a graduate of University of Texas with a degree in RTF and resides in Austin, TX.

Community First, A Home for the Homeless, is a documentary introducing an extraordinary new movement in Austin, TX, which is transforming the lives of homeless people through the power of community. As explained by the founder Alan Graham, “It is specifically designed to lift the chronically homeless off the streets of the Austin area offering them a place to call home, helping them to heal from the ravages of life on the streets allowing them to rediscover a purpose in their lives.” You’ll hear about the heartbreaking events that cause homelessness, and the heartwarming stories of being welcomed into a nurturing environment where dignity and self-worth are restored.