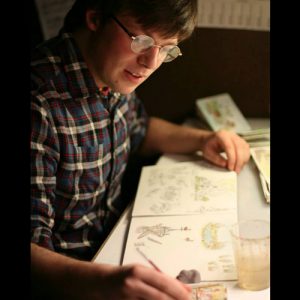 Seth Boyden was named one of Variety’s 10 Animators to Watch in 2016. His film An Object at Rest won the silver medal at the 2015 Student Academy Awards and the Walter and Gracie Lantz Animation Prize at the 2015 CalArts Character Animation Producers’ Show. The film also received the Special Jury Prize at the British Academy of Film and Television Arts Los Angeles (BAFTA Los Angeles). An Object at Rest was inspired by his childhood memory of finding a fossil while on a walk with his father. Boyden is currently working as a storyboard artist at Blue Sky Animation Studios.

The life of a stone as it travels over the course of millennia, facing nature’s greatest obstacle: human civilization.