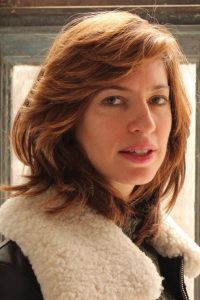 Alison Chernick is a New York based writer/director and filmmaker. Chernick’s first documentary was on contemporary artist Jeff Koons titled, The Jeff Koons Show. Her second feature-length documentary on artist Matthew Barney, titled Matthew Barney No Restraint, premiered at the Berlin Film Festival in 2006 and was acquired for theatrical distribution by The Weinstein Company. She founded the production company Voyeur Films in 2006.

Diagram of an Artist: Roy Lichtenstein was commissioned by the Tate Modern for its 2013 exhibition Lichtenstein: A Retrospective. The Artist is Absent, a short film on designer/artist Martin Margiela, premiered at the Tribeca Film Festival in 2015.  Chernick’s documentaries have been screened at various museums around the world, including the five Guggenheims, the Smithsonian, SFMOMA, and the Walker. She is the recipient of the Patricia Highsmith-Plangman Award. She has written for the Sundance Channel, Showtime, Sci-Fi, MTV, VH1, The History Channel, and National Geographic. Her commissioned short films often center around themes of art, fashion, gastronomy, and healthcare. In 2010, Chernick was signed for global commercial representation.

From Schubert to Strauss, Bach to Brahms, Mozart to…Billy Joel, Itzhak Perlman’s violin playing transcends mere performance to evoke the celebrations and struggles of real life; “praying with the violin,” says renowned Tel Aviv violinmaker Amnon Weinstein. Alison Chernick’s enchanting documentary looks beyond the sublime musician, to see the polio survivor whose parents emigrated from Poland to Israel, the young man who struggled to be taken seriously as a music student when schools saw only his disability. As charming and entrancing as the famous violinist himself, ITZHAK is a portrait of musical virtuosity seamlessly enclosed in warmth, humor, and above all, love.