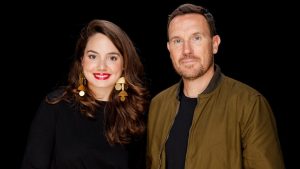 Cristina Costantini
SCIENCE FAIR is Cristina’s first feature and second collaboration with Darren. The pair previously partnered on “Death by Fentanyl,” a 2017 duPont Award-winning investigation about an opiate that’s making the worst drug epidemic in U.S. history even deadlier.

Long before Cristina was an investigative journalist, she was a science fair nerd. As a dweeby high school kid from Wisconsin, the international science fair is where she found her tribe. The documentary SCIENCE FAIR is a love letter to a world that validated her during the dark years of high school. As a freshman, she placed fourth and it changed her life forever.

After attending Yale University, she reported and produced for the New Haven Independent, The Huffington Post, ABC News, Univision and Fusion. Her first TV documentary, which looked at sex trafficking in Mexico, was nominated for two Emmys, and her reporting on immigration has won awards from GLAAD and the National Association of Hispanic Journalists.

She now lives in Los Angeles with her husband, Alfie, and a pug dog named Harriet.

Darren Foster
SCIENCE FAIR is Darren’s first feature and second collaboration with Cristina. The pair previously partnered on “Death by Fentanyl,” a 2017 duPont Award-winning investigation into how a powerful painkiller is turning the worst drug epidemic in U.S. history even deadlier. The project was part of Darren’s ongoing coverage of the opioid crisis, which began with his groundbreaking investigation “The OxyContin Express,” which received a 2009 Peabody Award, a Television Academy Honor and an Emmy nomination.

Darren’s other recent projects include “Chasing El Chapo,” a short documentary about the hunt for El Chapo Guzman that was infamously name-checked by Sean Penn in his Rolling Stone interview with the drug lord; “Borderland,” a critically acclaimed documentary series Darren directed for Al-Jazeera America, in which six ordinary Americans of different political persuasions make the journey across Mexico and the U.S. border (The New York Times called it “exploitative in a good way”); and “Inside: Secret America,” an investigative series he co-created and produced for National Geographic.

Darren has an M.S. from Columbia University’s Graduate School of Journalism. Born and raised in New York, he now lives in Los Angeles with his wife, Mariana, and son, Vasco.

Hailed by critics as “immensely likeable,” “brilliant and quirky” and an “ode to the teenage science geeks on who our future depends,” and winner of the audience award at Sundance and SXSW, National Geographic Documentary Films’ SCIENCE FAIR follows nine high school students from around the globe as they navigate rivalries, setbacks and, of course, hormones, on their journey to compete at The International Science and Engineering Fair. As 1,700 of the smartest, quirkiest teens from 78 different countries face off, only one will be named Best in Fair. The film, from Fusion Media and directed by the DuPont Award-winning and Emmy-nominated documentary filmmaking team Cristina Costantini and Darren Foster, offers a front seat to the victories, defeats and motivations of an incredible group of young men and women who are on a path to change their lives, and the world, through science.