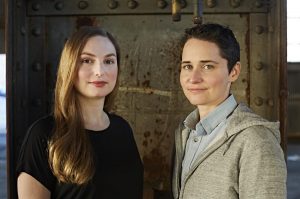 Laura Green (director / producer) is a documentary director and editor based in San Francisco. She has directed, produced and edited five short documentaries, which played at numerous festivals, including Palm Springs Shortfest, Aspen Shortsfest, Sarasota Film Festival, Mill Valley Film Festival, and Outfest. She edited True Son (2014), a feature length documentary, which premiered at the Tribeca Film Festival, as well as the ITVS-funded documentary web-series The F Word. Green is also an Assistant Professor at San Francisco State University. The Providers is her debut feature film.

Anna Moot-Levin (director / producer) is a documentary filmmaker and editor based in Brooklyn. She has directed, produced, shot and edited five short documentaries, including the award-winning film Track by Track (2013), which premiered at Slamdance and is now in distribution with Sproutflix. Her work has been screened at festivals around the world including The American Pavilion at Cannes and the AFI/Discovery Channel Silverdocs Film Festival. She is also an associate producer of the Academy Award-winning documentary Inside Job (2010) and editor of The Making of Gabrieli (2017) now streaming on KQED Arts. The Providers is her debut feature film.

Set against the backdrop of the physician shortage and opioid epidemic in rural America, The Providers follows three healthcare providers in northern New Mexico. They work at El Centro, a group of safety-net clinics that offer care to all who walk through the doors, regardless of ability to pay. Amidst personal struggles that reflect those of their patients, the journeys of the providers unfold as they work to reach rural Americans who would otherwise be left out of the healthcare system. With intimate access, the documentary shows the transformative power of providers’ relationships with marginalized patients.