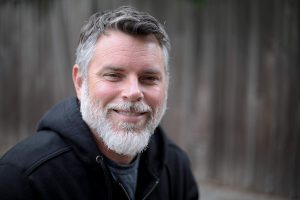 Don Hardy is an Emmy award-winning documentary filmmaker, journalist, and storyteller. Don’s new film, Pick of the Litter, premiered at the Slamdance Film Festival in January 2018 and was purchased by IFC Films/Sundance Selects for theatrical distribution.

Currently, Don is in production on two new feature documentaries: A Band Called Failure about the influential 90’s rock band, Failure and an untitled project that tells the story of the birth and growth of Sean Penn’s aid organization JP HRO after a catastrophic earthquake shook Haiti in 2010.

His most recent film, Theory of Obscurity, about the legendary music and art collective known as The Residents, premiered at SXSW in 2015 and was released theatrically by Film Movement in April of 2016.

Don also served as Director of Photography on Batkid Begins, which premiered at Slamdance in early 2015. Batkid Begins was released by Warner Brothers/New Line Cinema in June 2015.

Fingerprints is the story of two music programs for kids – one in Haiti and one in California – that come together, virtually, to record two songs. Along the way, the kids learn that, even though their lives are very different, their spirit, ambition, and love of life are strikingly similar…and music is a universal language that connects us all.