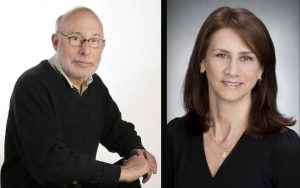 Mark Harris
After graduating from Harvard College, Mark Jonathan Harris started his professional career as a reporter for the famed City News Bureau of Chicago, covering crime from five in the afternoon to two in the morning. Within a year he moved on to reporting national news for the Associated Press and then to television, where he started making documentary films for the King Broadcasting Co. stations in Portland, Oregon, and Seattle, Washington.

Harris’s award-winning early films document some of the most important and contentious political issues of the 60s. Huelga! is a portrait of Cesar Chavez’s United Farmworkers Union and the first year of the union’s historic Delano grape strike. The Redwoods presents the Sierra Club’s successful case for establishing a Redwoods National Park. The Foreigners explores the work of a group of Peace Corps volunteers confronting the contradictions of U.S. foreign policy as they try to bring about social change in Colombia.

In 1973 Harris and his family moved to Los Angeles where he returned to print journalism at the same time that he continued making films. For several years a contributing editor to New West magazine, he also wrote articles, essays, and reviews in a number of national newspapers and magazines including TV Guide, American Heritage, the New York Times, the Los Angeles Times and the Washington Post. During this period he also began writing fiction. His short stories have appeared in literary journals, and he has published five novels for children, which have won multiple awards.

In the following years Harris alternated fiction, journalism, and filmmaking. Many of his later films deal with historical subjects. The Homefront examines the social and economic impact of World War II on this country. Unchained Memories: Readings from the Slave Narratives looks at slavery in America. His two Oscar-winning feature documentaries explore the Holocaust. The Long Way Home documents what happened to the survivors of the concentration camps in the period immediately following their liberation. Into the Arms of Strangers: Stories of the Kindertransport chronicles Britain’s rescue mission of 10,000 children in the nine months prior to World War II.

In recent years Harris has focused on producing. He produced the award-winning Darfur Now and executive produced two other high profile documentary features, Spirit of the Marathon and Living in Emergency: Stories of Doctors Without Borders.

Since 1983 he has taught filmmaking at the School of Cinematic Arts at the University of Southern California, where he is a Distinguished Professor. From 1990-96 he was the Chair of Film and TV Production.

Deborah Oppenheimer
Ms. Deborah Oppenheimer served as Executive Vice President of International TV Production at NBC Universal, Inc. since October 2010. Ms. Oppenheimer served as Executive Vice President of Production division at NBC Universal International Television Distribution since October 2010. She leads NBC Universal’s productions and partnerships in the international market place. Ms. Oppenheimer served as President of Mohawk Productions at Warner Bros. A Member of the college’s television and film arts program strategic council, she is on campus to screen her Oscar-winning documentary Into the Arms of Strangers: Stories of the Kindertransport. She is a noted Television Producer, whose credits include the Drew Carey Show, George Lopez, and others. Maintaining close ties with the college and SUNY, she was awarded an Honorary Doctor of Fine Arts from the State University of New York in 2005 and received the Buffalo State College Distinguished Alumnus Award in 2001. Ms. Oppenheimer graduated magna cum laude from Buffalo State with a Bachelor’s degree in English secondary education.

From producer Deborah Oppenheimer and writer-director Mark Jonathan Harris (HBO’s Oscar-winning Into the Arms of Strangers: Stories of the Kindertransport), Foster upends some of the most enduring myths about foster care, going beyond the sensational headlines and stereotypes. There are currently more than 400,000 children in foster care in the U.S., a number that continues to grow each year. Drawing on unprecedented access, Foster traces a complex path through the Los Angeles Department of Children and Family Services, interweaving first-hand stories of those navigating the system with insights from social workers, advocates and others working in the justice system. The film offers a realistic but hopeful perspective on a community that needs society’s support.