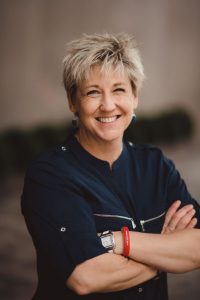 Sarah Hillyer is recognized as one of the leading practitioners in the field of sport for development and peace and is an international sports development consultant with more than 25 years of experience. She works diligently to promote peacebuilding and empowerment among girls, women, refugees, and persons with disabilities around the world.

Hillyer has worked on the ground in countries across the world, with the majority of her efforts spent developing sports programs with Muslim women in the Middle East. For her work and impact, Hillyer was named the 2009 Eva Mag’s Woman of the Year and the 2011 Generations for Peace Post-Doctoral Fellow.

At the Center, Hillyer sets the vision, writes grants, crafts curriculum, and develops applied research projects that promote peace and inclusivity for all through sport. She also serves as the lead coordinator on the U.S. Department of State Global Sports Mentoring Program, which has hosted more than 400 youth athletes and women’s empowerment and disability rights advocates from 75 countries on sports-based exchanges.

Hillyer earned her PhD from the University of Tennessee in sport sociology and a master’s degree in sport psychology from Murray State University. Hillyer completed her undergraduate work in sport management at Liberty University, where she also played basketball.

This is the story of one game, one basketball, one gift, and one girl. But it’s also your story. And my story. And the story of thousands of young girls and women who aspired to be like the greatest coach of all time. A winner. Not just on the court, but in life. It’s the story of a legacy. The legacy of a woman from a small town in Henrietta, Tennessee, who would grow up and change the world. And ultimately, in her relentless pursuit of excellence, inspire an entire generation to do the same.

This story begins in 2007. The world was an interesting place. War raged in the Middle East. School shootings dominated national headlines. Political tensions swirled around the U.S. presidential election. And the winningest coach in basketball history, Pat Summitt, celebrated her seventh national title.

For two University of Tennessee doctoral students, Sarah Hillyer and Ashleigh Huffman, all of these seemingly disparate ideas were completely intertwined – the world needs peace and sport can be the vehicle. Using their connections as graduate students and basketball camp coaches, Hillyer and Huffman approached Coach Summitt with one simple request – basketballs for the girls and women of Iraq.

What happened next was the beginning of an epic journey and an unlikely friendship between a forgotten generation of girls and the greatest basketball coach of all-time.