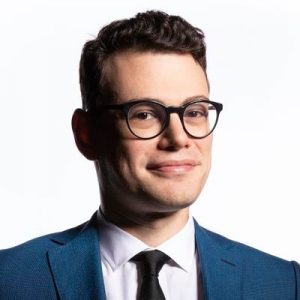 Alex Horwitz is a director, writer, editor, and producer with experience on films large and small. He directed and produced Hamilton’s America, a feature documentary that explores America’s founding while following Lin-Manuel Miranda through the creation of his pop culture sensation, Hamilton. Alex wrote and directed a short film starring Blue Man Group for their 25th Anniversary. His earlier work, Alice Jacobs is Dead, won Best Horror Film at the San Diego Comic Con before garnering awards all over the festival circuit. Alex edited and directed second unit on The Legend of Hallowdega, a short by renowned filmmaker, Terry Gilliam. He also cut the acclaimed feature documentary, Whitey: The United States of America v. James J. Bulger, for Academy Award-nominated documentarian, Joe Berlinger. Alex’s other credits as an editor include Iconoclasts and Oprah’s Master Class. He graduated from Wesleyan University, after which he worked as an assistant for director Julie Taymor before moving onto production jobs on the Spider-Man and Bourne franchises, as well as Martin Scorsese’s Shine a Light. He lives in New York City with his wife and son.

Celebrated journalist and author Malcolm Gladwell leads the first comprehensive documentary look at self-driving cars in Autonomy. The film is a cinematic exploration of the world of automated vehicles — from their technical history to the personal narratives of those affected by them to the many unanswered questions about how this technology will affect modern society. Autonomy features interviews with industry pioneers and scenes with cutting-edge “AVs” in action around the world. Inspired by a special issue of Car and Driver, Autonomy reinforces the context of where the “car” meets the coming revolution in mobility, presenting an essential primer on the subject and how it will affect you.