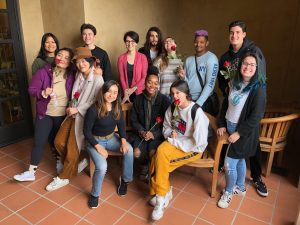 Hanna Adams
Hanna Adams is a filmmaker, sound designer, and editor based in Los Angeles, California. She grew up in Anaheim, California and started making films at a young age. Her love for storytelling led her to pursue a BFA in Film and Television Production at the University of Southern California. She is passionate about pursuing a career within the industry, particularly in post-production.

Cole Bacani
Cole Bacani is a studying film production at the University of Southern California, and leans toward directing these days. He enjoys coming of age dramatic narratives, and hopes to direct a feature length film one day.

Dariel FIlomeno
Hi! I’m Dariel Filomeno – a comic book artist, 2d Animator, Character Designer, Background Painter, Story Board Artist and Concept Artist. I was born in Puerto Rico where cartoons and anime inspired my zeal for comics, art, and design. When I was eight, my family and I moved to Rhode Island, where my passion for TV animation inspired me to pursue a BFA in Illustration at the Rhode Island School of Design. Currently, I am based out of Los Angeles and pursuing an MFA in Animation at the University of Southern California. In my free time you can find me people watching on the train, illustrating comics, drawing the things that inspire me, or creating complex character designs.

NamQuyen “Q” Le
NamQuyen “Q” Le is a filmmaker foremost, community health specialist, aspirational polymath, and proud cat mom. She jumpstarted her cinephilia at age 9 when she hogged the VCR player from her brothers to watch “The Lion King” on loop; these days, she can be found oscillating between film production projects, project managing at a translational research institute, and replenishing her circulatory system with coffee and Coke zero. If prompted, she will happily monologue about the importance of film editing, a good soundtrack, the endless possibilities of animation, and why her cat is the best.

Yolanda Morgan
Yolanda Morgan is a screenwriter and filmmaker who specializes in dramedy, and romance films. She will be graduating with a Bachelors of Arts degree in Cinema and Media Studies at the University of Southern California in the Fall of 2020. She aspires to a film director and screenwriter.

Victoria Perez
Victoria Perez is an aspiring producer based in Houston hoping to improve representation through digital platforms and transmedia. Victoria’s passion for food and storytelling has manifested itself through her editorial pieces for Spoon University and her creation of the blog, Spanglish. Victoria is an undergraduate student at the University of Southern California where she is majoring in Cinema and Media Studies with an emphasis in transglobal storytelling.

Ben Ragasa
Benjamin Ragasa brings life to vibrant characters with music and animation. He will be graduating with a Bachelor of Arts in Animation and Digital Arts at the University of Southern California in 2022. Benjamin wishes to pursue a career in animation / creative education.

Josie Stocks
Josie Stocks is an animation student in her second year who enjoys building world and environments for stories of the heart. She has worked with Botka Collective, Zach King Studios, and has been a freelance painter. She looks forward to graduating and is hopeful to create the newest and freshest worlds that people can immerse themselves in.

John Stover
John Stover is an Animation Director and visual artist based in Los Angeles. He has studied animation at The School of the Art Institute of Chicago and USC School of Cinematic Arts. His work is seen in independent short films, music videos and commercials. As the Head of Animation at AnimalCamp John works as a Creative Producer, developing projects, organizing teams, and creating experimental content. Their work can be seen at animalcampcollective.com

Jinghan Tian
Jinghan Tian is a visual development artist and a animator from China. She spent her undergraduate career studying environmental art. She will be graduating with a Master of Arts degree in Animation and Digital Arts at the University of Southern California in spring 2019. She is passionate about doing illustrations and concept art design.