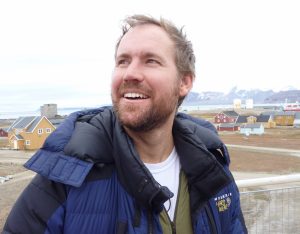 Shaun’s been on filming expeditions around the world since he was a young buy, but it wasn’t until a trip to Palau at the age of 13 that he realized that his dad’s passion for storytelling was in his blood. He was snorkeling on the “set” when he encountered a giant grouper (think the size of a refrigerator), then months later got to watch the fervent reaction of kids in the theatre who were watching The Living Sea—seeing on the giant screen what he was able to experience underwater first hand. It dawned on him that he had caught the filmmaking bug.

Since then, Shaun has produced the award-winning 3D giant-screen films National Parks Adventure, Dream Big: Engineering Our World, To The Arctic, Humpback Whales, Journey to the South Pacific, and We, the Marines. Shaun leads the company’s Business Development and Partnership team and has successfully raised much of the funding for these IMAX educational films. Shaun received a MFA degree in Film Production from the University of Southern California. He and his wife Katie live in Laguna Beach with their three children. He can’t wait to take them all on expeditions and show them the wonders of nature firsthand.

In America’s musical cities, every chord, every riff, every bang of a drum tells a story. In America’s Musical Journey these stories come together to create a soundtrack for the American experience—a soundtrack that showcases the nation’s diversity and its collision of cultures, culminating in a unique blend of sound, music and innovation unlike anywhere else in the world.