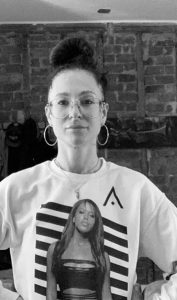 LAURENCE MATHIEU-LEGER – DIRECTOR/PRODUCER/DOP
Laurence Mathieu-Leger is an award-winning director, producer, and editor, as well as a mother of three. She was previously a senior video producer at the Guardian US, and is the director and co-producer of “Willie“, a feature length documentary about the National Hockey League’s first black player, Willie O’Ree.

Based in New York City, Laurence specializes in long and short format documentary projects that focus mainly on social justice. With over 12 years of experience in creative and managing roles, her work has been featured on major networks and organizations such as The Guardian, Reuters, the American Museum of Natural History, and the United Nations among others.

In 2017, Laurence received international recognition after winning a World Press Photo award for her groundbreaking work on the Guardian interactive production The Injustice System – which she spearheaded. In 2018, she was honored with the prestigious Edward R. Murrow Award in the continuing coverage category for her work on Keystone XL: Driving the US pipeline route.

BRYANT MCBRIDE – PRODUCER
Bryant is an entrepreneur and builder.Since 2000, he has built eight start-ups all at the intersection of sports, media and technology. He served as Vice President of Business Development for the National Hockey League from 1991-2000 – the first black executive to do so. While at the NHL, along with other revenue driving initiatives, Bryant created 30+ grassroots programs to provide access to hockey for disadvantaged and at-risk boys and girls across North America. To propel that effort, Bryant hired Willie O’Ree more than 20 years ago and that important work continues today.

He is a sought after speaker, continues to mentor some of the brightest minds in sports, media and technology and is relentless in his efforts to provide opportunity for young people. “Willie” is his first feature length film.