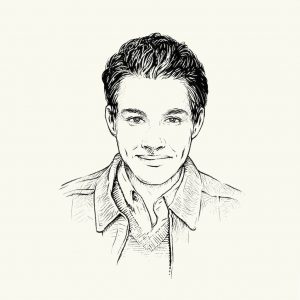 Award-winning director and 2020 Forbes 30 Under 30 entrepreneur Ben Proudfoot is the founder and creative force behind Breakwater Studios.

Once a world champion in sleight-of-hand magic, Ben now brings that spirit of wonder to filmmaking, directing or producing more than forty original short films a year, many in partnership with brands like The New York Times, Charles Schwab & Co., Annapurna Pictures and Unity Technologies. The Nova Scotia native drives Breakwater’s humanist storytelling across documentary, narrative, and branded mediums.

Whether he’s crafting the latest Breakwater Original or directing an international branded documentary series, Proudfoot leads a diverse team of dedicated artists, craftspeople, technologists, and business people across a variety of pre-, post-, and physical production spectrums at the studio and around the globe, very much in the model of the original studio system. Proudfoot is highly sought-after for telling emotionally-moving and easily shareable stories in a short-form documentary style that combines the best of premium Hollywood filmmaking. In 2018, Proudfoot partnered with Gigi Pritzker and Clint Kisker’s MWM to make Breakwater Studios one of the first venture-backed branded content studios.

In addition to a long list of awards and distinctions, festival successes, and placement on television shows, such as Oprah’s Super Soul Sunday, Breakwater won an Emmy for the PBS documentary Montage: Great Film Composers and the Piano. In 2019, Proudfoot’s short documentary series, Almost Famous, including the films The King of Fish and Chips, Kim I Am, The Other Fab Four & The Lost Astronaut, were New York Times Op-Docs. His original film, That’s My Jazz, had its world premiere at the Tribeca Film Festival, and his branded film, The Youngest Captain, won a 2019 Webby Award. His work has also received seven coveted Vimeo Staff Picks for films That’s My Jazz, ink&paper, The Ox, Turns, Why This Road: Dan Portelance, Kunstglaser, and Still Here, made with Annapurna Pictures. He lives in Los Angeles with his wife Grace and dog, Dumpling.