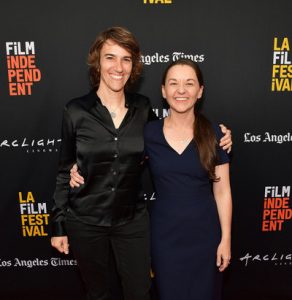 Sally Rubin
Sally Rubin is a documentary filmmaker, editor, and professor who has worked in the field for over twenty years. She recently completed a documentary about stereotypes of Appalachia and their impact on our last presidential election, entitled hillbilly. The film is in distribution through the Orchard (Cartel Land, Life Animated) funded by the National Endowment for the Humanities and the National Endowment for the Arts, recently won the Jury Prize for Best Documentary at the Los Angeles Film Festival and has been praised by Michael Moore and Dolly Parton. In 2014 Rubin completed Life on the Line (with Jen Gilomen) about a teenage girl growing up on the U.S./Mexico border. The film broadcast nationally on PBS and premiered at the Santa Barbara International Film Festival. Rubin’s previous film, Deep Down was an ITVS-funded feature-length documentary about two friends in eastern Kentucky who find themselves divided over mountaintop removal coal mining near their homes. The film was part of the 2010-2011 Independent Lens Emmy-winning PBS series, and has reached almost 1.5 million people through its broadcast, distribution, and outreach campaign. It was nominated for an Emmy for its Virtual Mine outreach project, in the category of New Approaches to News and Documentary. It was funded by Chicken and Egg Pictures, the MacArthur Foundation, ITVS, and the Fledgling Fund.

Rubin’s other credits include The Last Mountain, a film about her father’s death in a hiking accident that was broadcast on PBS, Robert Greenwald’s Iraq For Sale: The War Profiteers a nd the television series The Freedom Files (editor), as well as David Sutherland’s 6-hour Frontline special Country Boys (associate producer), and Riverwebs (editor), which broadcast nationally on PBS. In 2004 Rubin founded the groundbreaking Straight Outta Grrrlville Film Festival in San Francisco, and continues to produce local events and benefits for artists and filmmakers, in conjunction with her own continued work.

After earning her M.A. in Documentary Film and Video from Stanford University, Rubin fell deeply in love with the field of documentary film, where she hopes to continue working for a very long time.

Ashley York
Ashley York is a content creator who is interested in documentaries, cinematic journalism, and media for social change and justice. She has worked on Academy Award® winning teams and as a producer on projects that have premiered at the Sundance, Berlin, and SXSW film festivals as well as on Netflix, HBO, National Geographic, Oprah Winfrey’s Network, A&E, IFC, Discovery, and the
Sundance Channel.

Ashley is committed to a feminist approach and intrigued by work that intersects the emotional and ideological. She is inspired greatly by the works of bell hooks, James Baldwin, Susan Sontag, the late Aimé J. Ellis, and Silas House.

She is a member of Film Fatales, Women in Film, the International Documentary Association, Film Independent, the Appalachian Studies Association, and a founding member of the Los Angeles-based design collective, Take Action Games, which has been recognized for its commitment to highlighting issues that affect women and girls and partnered with various social justice and mission-based organizations in the making of digital activist projects, including the United Nations Entity for Gender Equality and the Empowerment of Women, the International Crisis Group, the Independent Television Service, and the Center for Asian American Media. Take Action Games received an Emmy Award nomination in the category of New Approaches to News and Documentary Film as well as the prestigious Governors’ Award from the Academy of Arts & Sciences (the Emmy’s highest honor) in recognition of a campaign co-produced by mtvU to raise awareness about the ongoing genocide in the Darfur region of the Sudan.

Appalachia is no stranger to the complexity of media representation. Since our country’s inception, there has been a palpable divide between Urban and Rural America. North fights South, Democrats rail against Republicans, “cosmopolitan” looks down on “country.” Within this great divide, certain regions are viewed as “other,” and blamed for America’s social ills. Since the presidential election, the cultural divide in America has expanded even further. Stereotyping and slurs are rampant, finger-pointing and name-calling abound. hillbilly goes on a personal and political journey into the heart of the Appalachian coalfields, exploring the role of media representation in the creation of the iconic American “hillbilly,” and examining the social, cultural, and political underpinnings of this infamous stereotype. hillbilly uncovers an unexpected set of artists, poets, and activists, queer musicians, “Affrilachian” poets, and intersectional feminists—all unexpected voices emerging from this historically misunderstood region. hillbilly is a timely and urgent exploration of how we see and think about Appalachian and rural identity in contemporary America, offering a call for dialogue between urban and rural communities during this divisive time in our nation’s history.