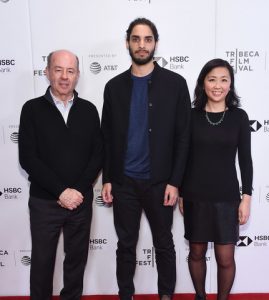 INNBO SHIM is a film and television producer based in New York. With an emphasis on international and socially-driven content, Innbo has produced documentary and narrative features with U.S.festival premieres at Sundance, Tribeca as well as international festival premieres at Toronto, Venice, Busan IFF, Rotterdam, Zurich, and Camerimage. Completed projects for The Documentary Group include the documentary feature When Lambs Become Lions (Oscilloscope Films), We Will Rise: Michelle Obama’s Mission to Educate Girls Around the World for CNN Films, and the Oscar-nominated Cartel Land. She has also produced shows and series for Netflix, Nat Geo, PBS, CNN, and Discovery. Innbo often works with directors who pivot between narrative and documentary forms. Her version of film school was working with director Jonathan Demme and his community of brilliant collaborators on several features, including Rachel Getting Married and Jimmy Carter Man From Plains.

Tom Yellin is the president and executive producer of The Documentary Group, a company that produces theatrical documentaries, primetime programs for ABC News, and documentaries for other broadcasters and distributors.

TDG’s recent credits include Frontline: Ten Trillion and Counting, which aired on PBS in March, 2009; China: Inside Out, an ABC News primetime special;  Babyland, a special edition of 20/20 for ABC; and a series of educational videos for the The Annenberg Foundation.  Last year, TDG’s Operation Homecoming was nominated for an Academy Award and STEEP, a film about the risk and exhilaration of big mountain skiing, was released by Sony Pictures Classics in over 100 movie theaters across the country.

Jon Kasbe is an Emmy Award-winning Australian-Indian director and cinematographer. His debut feature, “When Lambs Become Lions,” was a 2017 Sundance Documentary Fund recipient, won Best Editing at the 2018 Tribeca Film Festival, and was nominated for two 2019 IDA Awards in Best Cinematography and Best Editing. The film was released theatrically across the United States by Oscilloscope Laboratories and is now available on Apple TV and Amazon. His short films have screened at festivals worldwide and been recognized by SXSW, Hot Docs, Webbys, Vimeo Staff Picks, Camerimage Film Festival, Sheffield Film Festival, and National Geographic. In 2018 he was selected for DOC NYC’s inaugural 40 Under 40 list. He is currently developing a new film in Concordia Studios Artist-in-Residence.