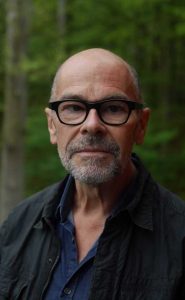 Robert Stone is a multi-award-winning, Oscar-nominated and Emmy-nominated documentary filmmaker. Born in England, he grew up in both Europe and America. After graduating with a degree in history from the University of Wisconsin-Madison, he moved to New York City in 1983 to pursue a career in filmmaking. He gained considerable recognition for his first film, Radio Bikini (1987), which premiered at Sundance, was nominated for an Academy Award for Best Feature Documentary and was the first of his seven films to premiere on American Experience. His best-known works includes Guerrilla: The Taking of Patty Hearst (2004), which premiered at Sundance and went on to become one of the most highly acclaimed theatrical documentaries of the year. That was followed by the documentary feature Oswald’s Ghost (2007), for which Stone earned a second Emmy nomination for Outstanding Achievement in Non-Fiction Filmmaking. Earth Dayswas the Closing Night Film at the 2009 Sundance Film Festival and was released theatrically to wide critical acclaim. His next film, Pandora’s Promise, premiered at the 2013 Sundance Film Festival, won the prestigious Green Award at the Sheffield Documentary Film Festival and was broadcast on CNN in 2013. In addition toRadio Bikini, Guerrilla, Oswald’s Ghost and Earth Days, Stone also produced The Satellite Sky, Civilian Conservation Corps and Cold War Roadshow for American Experience.