Synopsis:
How can international disputes be resolved in the courtroom rather than on the battlefield? ALL RISE brings this complex question into sharp and personalized focus through the journeys of seven passionate students of law from India, Israel, Jamaica, Palestine, Russia, Singapore, and Uganda to compete in the world championships in Washington, DC, of the Philip C. Jessup International Law Moot Court Competition (the “Jessup”), the world’s largest simulated court competition. The “court” is the International Court of Justice (“ICJ”), the judicial arm of the United Nations. Against this backdrop, this moving film lays bare the struggles, triumphs and transformations they experience alone and together.

Jeffrey Saunders is an Emmy-nominated and Peabody Award-winning filmmaker. He founded CinemaCapital in 1998, a production company based in New York City focused on realizing visual content from feature films to interactive programming. After a short-lived career as a professional soccer player, he got his start in film in 1993 working as a script reader at EMK Productions in Los Angeles working on behalf of HBO and TNT. Since then, Mr. Saunders has directed and produced fiction films, nonfiction films, series, commericials and Industrials as well as working with Fortune 500 companies on their brand strategies. His films have been selected at international festivals including the Berlin Film Festival, SWSX, IDFA and Thessaloniki Film Festival to name a few and acquired by distributors and boradcasters including Sundance, ARTE, PBS, Film Movement, IndiePix, ZDF, FilmMovement, Netflix and SBS. His feature film GOAL DREAMS was selected as one of the top 10 ‘Movies That Matter’ by Amnesty International in 2006. In 2010, Mr. Saunders produced the feature fiction film A NY THING staring Greta Gerwig and Jonathan Zaccai, which premiered at the SWSX Film Festival. His current feature film, ALL RISE, follows the world’s largest international law moot court completion and is nearing completion. 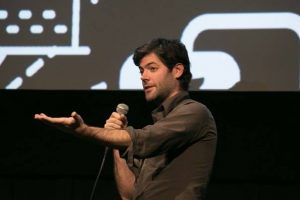 Jay Shapiro has been working in the film industry for a decade after having studied documentary and film production at Clark University where he was awarded a fellowship by the Anton Group to produce a documentary in Ghana entitled LIKE ME, I AM HERE. He has specialized in international documentaries and recently released OPPOSITE FIELD, a film which chronicles a Ugandan Little League Baseball team. ALL RISE marks a natural progression in Shapiro’s career which allows him to explore his intellectual interests in the future of international law while employing his expertise in multi-country production.