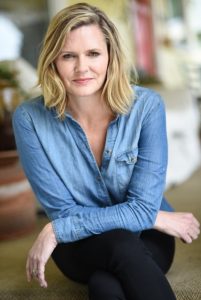 Documentary director Laura Gabbert’s critically acclaimed films deploy full measures of humor and drama to unflinchingly put a human face on such difficult social issues as aging, the environment, and AIDS. NO IMPACT MAN, which the Los Angeles Times called “terrifically entertaining, compelling and extremely funny,” premiered at the 2009 Sundance Film Festival, and played theatrically in over 30 cities. Her previous film SUNSET STORY (PBS) won prizes at Tribeca and LAFF. About it, the New York Times wrote, “Sunset Story may break your heart, but it will also make your day.” Other credits include THE HEALERS OF 400 PARNUSSUS (PBS) and GETTING TO KNOW YOU (Sundance, Venice). Most recently, Laura directed and produced the feature documentary CITY OF GOLD about Pulitzer Prize winning food writer Jonathan Gold. The film premiered in competition at the 2015 Sundance Film Festival where IFC/Sundance Selects picked it up. City of Gold is now playing theatrically in over 40 markets. Laura received her MFA from UCLA’s School of Theater Television and Film.