Synopsis:
East Side Sushi introduces us to Juana, a working-class Latina single mother who strives to become a sushi chef. Years of working in the food industry have made Juana’s hands fast—very fast. She can slice and dice anything you throw at her with great speed and precision. Forced to give up her fruit-vending cart in order to find a more secure job, Juana lands a position as a kitchen assistant at a local Japanese restaurant. It is there she discovers a new friendship and a whole new world of cuisine and culture, far-removed from everything she has ever known. While working in the restaurant’s kitchen, Juana secretly observes the sushi chefs and eventually teaches herself to make a multitude of sushi. Her creativity sparked, Juana’s re-ignited passion for food drives her to want more from her job and her life. Eventually she attempts to become a sushi chef, but is unable to because she is the “wrong” race and gender. Against all odds, she embarks on a journey of self-discovery, determined to not let anyone stop her from achieving her dream. 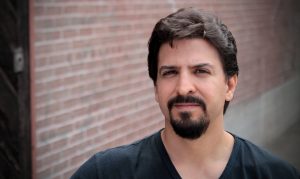 Born and raised in the inner-city of Oakland, California, Anthony Lucero enjoys making films that are multicultural and draw inspiration from his observations of people from all walks of life. After receiving his B.A. in Film from San Francisco State University, Lucero worked as a commercial editor for several years before moving into the visual effects world at Lucasfilm’s Industrial Light and Magic, which led him to work on blockbusters such as Star Wars: Episode I & II, Pirates of the Caribbean, Ironman, The Mummy and Harry Potter and the Prisoner of Azkaban. Lucero also worked as a documentarian on the behind-the-scenes at Lucasfilm for the latest Star Wars installment, The Force Awakens. Anthony’s latest narrative feature film reflects a fusion of cultures and flavors in East Side Sushi, an original screenplay that tells the story of Juana, a Mexican immigrant who strives to become a sushi chef. East Side Sushi has gone on to win 13 film festival awards, holds a 100% Rotten Tomatoes score and was listed as one of the “Top 10 Films of 2015” by San Francisco Weekly and one of “The most overlooked films of 2015” from the LA Times. East Side Sushi is Anthony Lucero’s feature film directorial debut.