Synopsis:
Joy Johnson would wake up each day before dawn, pour herself a cup of coffee, lace up her running shoes and read this passage from the Book of Isaiah: “They shall run and not be weary.” In this moving film for ESPN’s 30 for 30 series, director Gabe Spitzer intertwines Joy’s own words with evocative footage to tell the story of this remarkable woman, who was born on Christmas Day in 1926 and inspired us all. After raising four children, she took up running at the age of 59 and went on to run 25 New York City Marathons, the last in 2013 at the age of 86. As this film shows, our final steps don’t matter as much as taking the first of a million. 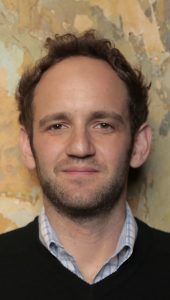 Gabe Spitzer, a three-time Emmy-award winning director and producer who has worked on some of the most innovative and cutting-edge documentary programs in the sports television space in recent years. Gabe spent seven years on staff at HBO, where he was a producer in both the field and the edit room on the groundbreaking series 24/7. He worked on 16 different installments of the series, and was embedded in the field for month-long assignments with boxers Floyd Mayweather and Manny Pacquiao as they prepared for their biggest fights; NASCAR superstar Jimmie Johnson leading up to the Daytona 500; and in-season with the Pittsburgh Penguins and Philadelphia Flyers as the Winter Classic approached. In 2013, Gabe codirected Legendary Nights: The Tale of Gatti-Ward, a feature-length documentary which aired on HBO. Narrated by Mark Wahlberg, the film tells the story of Micky Ward and Arturo Gatti, two of boxing’s greatest warriors who became close friends after their memorable trilogy of fights. In early 2014, Gabe directed Rise as One, a six-part documentary series sponsored by Budweiser and produced for Fox, which aired in over 60 countries leading up to the FIFA World Cup in Brazil. The series showcased the unifying power of soccer around the world, with each episode telling a story of how the sport has broken down barriers, bringing people together after wars, natural disasters or political strife. Gabe recently wrapped directing Every Day, a 30 for 30 Short for ESPN which looks at the life of Joy Johnson, an 86-year-old avid marathon runner. The film premiered on opening night of the 2015 Sundance Film Festival and was also selected to play at SXSW and Tribeca. Currently, Gabe is in production on a feature length 30 for 30 project for ESPN on John Daly, as well as a documentary for Tribeca Films and Dick’s Sporting Goods on the three-time gold medalist Kerri Walsh Jennings, in the lead-up to the Rio Olympics in 2016. He also serves as the showrunner of Peter Berg’s HBO documentary series State of Play, which examines modern day sports themes and how they connect to larger society. Spitzer graduated from Wesleyan University. He lives in Brooklyn, NY, with his wife Meg.