Synopsis:
I’m Not Racist… Am I? is a feature documentary about how this next generation is going to confront racism. We asked 12 teenagers from New York City to come together for one school year to talk about race and privilege in a series of workshops and in conversations with friends and family members. We hope that by documenting their experience, the film will inspire others to recognize and interrupt racism in their own lives. 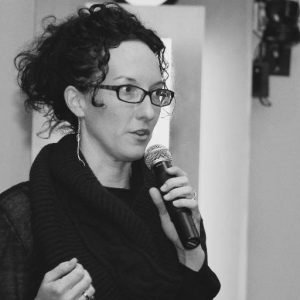 Catherine Wigginton Greene is a director, writer, and producer with Point Made Films, an independent production company based in New York City that makes documentaries about American identity.

She directed the feature documentary “I’m Not Racist… Am I?” which follows a diverse group of teens through a yearlong exploration of race and racism. Previously, she coproduced the documentary feature “In 500 Words or Less,” which followed four high school seniors as they tried to figure out who they were and who they wanted to become while forging through an anxiety-filled college application process.

In addition to making films, Catherine develops short educational videos, curricula, and discussion guides to accompany all of Point Made’s films so that viewers can connect more deeply to the film’ subject matter. She also travels the U.S. leading workshops and facilitating dialogue about race and racism. She currently has in development an educational video series to accompany “I’m Not Racist… Am I?,” and she wrote and produced the “Adopted: We Can Do Better” video series for adoptive families – a companion educational program for the documentary “Adopted” that explores the
unforeseen complications in transracial adoption.

Prior to working with Point Made, Catherine received her MS in Journalism from Columbia University’s Graduate School of Journalism and she wrote feature stories for magazines and alternative newsweeklies. She lives in Washington, D.C., with her husband and three daughters.