Synopsis:
Mosquita y Mari is a coming of age story that focuses on a tender friendship between two young Chicanas. Yolanda and Mari are growing up in Huntington Park, Los Angeles and have only known loyalty to one thing: family. Growing up in immigrant households, both girls are expected to prioritize the well-being of their families. Yolanda, an only child, delivers straight A’s and the hope of the American Dream while Mari, the eldest, shares economic responsibilities with her undocumented family who scrambles to make ends meet. When Mari moves in across the street from Yolanda, they maintain their usual life routine, until an incident at school thrusts them into a friendship and into unknown territory. 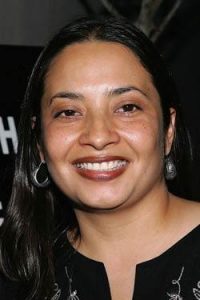 Aurora Guerrero is a queer-identified Chicana born to immigrant Mexican parents and raised in the San Francisco Bay Area. She received her B.A. in Psychology and Chicano Studies at UC Berkeley. Later, she obtained her M.F.A. in film directing from Cal Arts and has over 15 years experience as a writer/director. Guerrero has made award-winning short films and has worked as an assistant to directors on films such as Real Women Have Curves and La Mission. Guerrero’s first fiction feature film, Mosquita y Mari, about a budding love between two 15 year old Chicanas from southeast Los Angeles, traveled top-tier U.S and international film festivals including Sundance, Melbourne, Goteborg, Sao Paolo and Guadalajara, garnering multiple awards including Best First Narrative Feature and Best Leading Actress at Outfest and earning a 2013 John Cassavetes Spirit Award nomination. Mosquita y Mari was theatrically released in Europe and New York City where it received critical praise. Guerrero’s second feature film, Los Valientes, about a gay, undocumented immigrant stuck in a conservative rural town in Pennsylvania, has already received support from the Sundance Institute, San Francisco Film Society and Tribeca Film Institute. Guerrero is a 2012 Time Warner Fellow and a 2015 Berlin Talent Campus Fellow.