Synopsis:
What exactly does food reflect about Asian Pacific Americans? Off the Menu: Asian America grapples with how family, tradition, faith, and geography shape our relationship to food. The program takes audiences on a journey from Texas to New York and from Wisconsin to Hawaii using our obsession with food as a launching point to delve into a wealth of stories, traditions, and unexpected characters that help nourish this nation of immigrants.

Off the Menu is a roadtrip into the kitchens, factories, temples and farms of Asian Pacific America that explores how our relationship to food reflects our evolving community. The feature documentary is a one-hour PBS primetime special by award winning filmmaker Grace Lee (American Revolutionary: The Evolution of Grace Lee Boggs) co-produced by the Center for Asian American Media and KQED, with funding provided by the Corporation for Public Broadcasting. 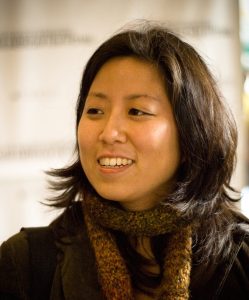 Grace Lee is an independent filmmaker working in both fiction and documentary film. She directed the 2014 Peabody Award-winning documentary AMERICAN REVOLUTIONARY: THE EVOLUTION OF GRACE LEE BOGGS, which The Hollywood Reporter called ”an entertainingly revealing portrait of the power of a single individual to effect change.” The film premiered at the Los Angeles Film Festival where it won its first of six audience awards before its broadcast on the PBS documentary series POV. Her previous documentary THE GRACE LEE PROJECT won multiple awards, broadcast on Sundance Channel, PBS and was called “ridiculously entertaining” by New York Magazine.

Other feature directing credits include JANEANE FROM DES MOINES, set during the 2012 presidential campaign, which premiered at the 2012 Toronto Film Festival as well as AMERICAN ZOMBIE, a personal horror film, which premiered at Slamdance and is distributed by Cinema Libre. Grace received her MFA in Film Directing from UCLA Film School where her thesis film won a Student Academy Award, Most recently she directed the Emmy-nominated MAKERS: WOMEN IN POLITICS and OFF THE MENU: ASIAN AMERICA, both of which aired nationally on PBS.