Synopsis:
Based on the beloved book by Tim Tharp, THE SPECTACULAR NOW is the story of Sutter Keely (Miles Teller) – high school senior, effortless charmer, and self-proclaiemd “life of the party” – and of how he unexpectedly falls in love with the “nice girl” Aimee Fineky (Shailene Woodley). While Aimee dreams of the future, Sutter lives in the now. And yet somehow, they’re drawn together. What starts as an unlikely romance becomes a sharp-eyed, straight-up snapshot of the heady confusion and haunting passion of youth – one that doesn’t look for tidy truths. The film was directed by James Ponsoldt and written by Scott Neustadter and Michael Weber ((500) DAYS SUMMER), and also features wonderful supporting turns from Brie Larson, Kyle Chandler, Jennifer Jason Leigh, and Mary Elizabeth Winstead. 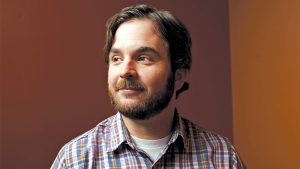 James Ponsoldt was raised in Athens, Georgia, received his bachelor’s degree from Yale, and received an MFA in directing from Columbia University. His first feature, “Off the Black,” premiered at the Sundance Film Festival in 2006; in 2009, he co-wrote the award-winning graphic novel, “Refresh, Refresh” (selected by Alison Bechdel for “The Best American Comics 2011”); his second film, “Smashed,” won a Special Jury Prize at Sundance in 2012, received an Independent Spirit Award nomination for lead Mary Elizabeth Winstead, and went on to critical acclaim worldwide. “The Spectacular Now” received a Special Jury Prize at the the 2013 Sundance Film Festival, was nominated for multiple Independent Spirit Awards, and was released in theaters via A24 Films. “The End of The Tour” premiered at Sundance 2015, was released by A24 Films, and was nominated for two Independent Spirit Awards. Ponsoldt also directed the pilot of the Netflix series “Master of None” and recently wrapped his newest feature, “The Circle,” starring Emma Watson, John Boyega, and Tom Hanks.