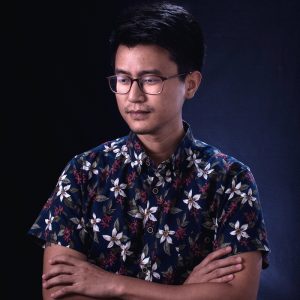 Lamin Oo, born and raised in Myanmar, is a documentary filmmaker based in Yangon. He graduated from Gettysburg College in Pennsylvania, with a degree in Psychology and Philosophy. Since returning to Myanmar in 2013, Lamin has dedicated himself to documentary filmmaking with his team at Tagu Films. In 2014, he produced an award-winning documentary film, “This Land Is Our Land”, which captured the plights of farmers in Myanmar. Since then, he has collaborated with local and international filmmakers on an array of stories about Myanmar and its people. His work has been recognized for awards both locally and internationally. In 2016, Lamin received The Power of Film Humanitarian Award given by FilmAid Asia for his documentaries. Lamin has also established and fostered connections with new filmmakers to help develop their storytelling capabilities. His main interest is in telling personal stories that paint a more complete picture of life in Myanmar as illustrated in works such as “Homework” – a small family moment of a father, who works abroad, video chatting his family – and “The Special One”, which tells the story of a fishmonger from Yangon who is passionate about football.