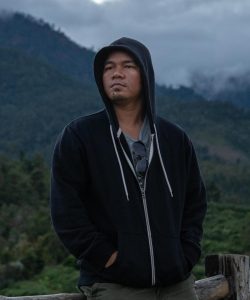 Makara OUCH is a Cambodian filmmaker. He has produced and directed several documentary films, such as Anlong Veng, The Kingdom of Memory, Hope for the Future, Integrity, The Long Road to Education, and a social spot, Sidewalk, which was commissioned by Phnom Penh City Hall.  In late 2017, Makara directed and produced a series of documentaries titled Village History, Pol Pot Home, and Genocide Education in Cambodia for the Documentation Center of Cambodia which were screened in Cambodian high schools. In 2019, Makara release his feature length documentary film, Jungle Guard, which follows a Buddhist monk community that has assumed the role of protectors of a natural forest and its indigenous wildlife that is located in the last stronghold of the Khmer Rouge rebel army. The film received the recognition and support from the U.S. Embassy in Cambodia, USAID, UNDP and the Royal Government in Cambodia and was screened at several universities and public locations around the country to raise awareness among students and local people about conservation and climate change.