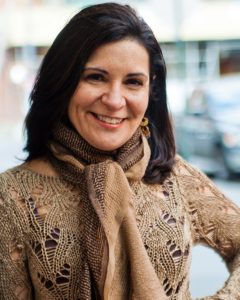 Marilyn Agrelo is a New York director and producer. Marilyn’s directorial debut was Mad Hot Ballroom, which enjoyed a theatrical run of over 24 weeks and took its place among the top 10 highest-grossing documentary films of all time. Mad Hot Ballroom is currently in pre-production for its Broadway debut. IFC Films released Marilyn’s feature film, An Invisible Sign in 2010. She has directed numerous commercials and branded content films that have aired around the world, and several projects for television and new media, including Emmy-winning children’s series Sesame Street and The Electric Company, and The Untold Stories of Motherhood for the Oxygen Network. Her documentary shorts No Small Parts and Good Muslim Girls played in film festivals around the world. She is currently in production on Street Gang, a documentary feature about the activist visionaries behind the creation of Sesame Street in the 1960s and early ‘70s. Agrelo continues her research and filming on a very personal film entitled Us and Them about her divided family in Cuba and the U.S. Marilyn traveled with AFS to Tajikistan, Iraq (twice), Bolivia, Pakistan and Panama.