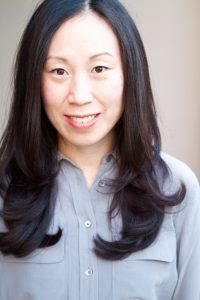 Angela Kang joined The Walking Dead writing staff in Season 2 as a Story Editor, quickly rising up the ranks to Co-Executive Producer by Season 5. For Season 7, she expanded her relationship with AMC by signing an overall deal to continue her work on the hit series while developing new projects for the studio. She was also named one of Variety’s 2016 “10 TV Writers To Watch.”

A Southern California native, Kang received a B.A. in Theater and English from Occidental College, and an M.F.A. in Writing for Screen and Television from the USC School of Cinematic Arts, where she was a recipient of the prestigious Annenberg Graduate Fellowship.

Angela’s first industry experiences were as a features development intern for the Dino De Laurentiis Company and a writer’s office/research intern for ABC’s Private Practice. Shortly after completing the CBS Writers Mentoring Program and graduating from film school, she landed her first staff writing job on NBC’s Day One. She then went on to write for the critically acclaimed cult favorite FX series Terriers before starting on The Walking Dead in 2011.