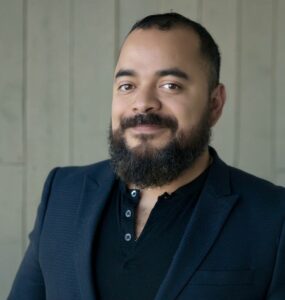 Eduardo Cisneros is a Mexico-born, U.S.-based screenwriter and producer. He is currently the co-creator, executive producer, and writer of the international hit and Critics’ Choice Award-nominated half-hour comedy series, ACAPULCO (AppleTV+). He co-wrote and co-produced the #1 Spanish-language film of all time in the U.S., INSTRUCTIONS NOT INCLUDED. He wrote and produced the feature films HALF BROTHERS (Focus Features) and WAR OF LIKES (Sony), and co-produced TO LESLIE (SXSW 2022) and THE OBITUARY OF TUNDE JOHNSON (Hulu). In his native Mexico, he co-created two of the most successful Spanish-language television comedy shows of recent years: XHDRBZ and FAMILIA P. LUCHE, and in the U.S. he was a writer/producer for the Latin Grammys and SNL MÉXICO. He has sold primetime comedy pilots to ABC and Fox, signed multi-picture studio feature deals with Fox International and Sony International, and worked as a sitcom development consultant for Sony Television International. Along with his writing and producing partner, Jason Shuman, they recently signed an overall feature production deal at Sony Pictures. Cisneros is on the advisory board of the Los Angeles Academy of Arts and Enterprise (LAAAE); and is a founding member of Clubhouse Latinx, a LGBTQIA+ Latinx film and television writers organization.