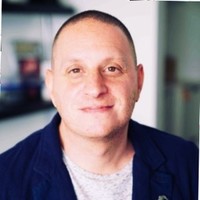 JIM FRAENKEL is a media executive with an award-winning body of work spanning the worlds of news and documentary, reality and live-event programming across both broadcast and digital platforms. Jim joined Spotify, where he currently serves as the Head of Original Video Series, in the Summer of 2016. In recent years, Jim ran multiple series for Bravo, including Million Dollar Listing New York. He was a chief architect of the innovative digital operation for FOX’s The X Factor and also served as Executive Producer on the acclaimed investigative documentary series, Vanguard, for Current TV. Prior to that, Jim spent more than fifteen years with MTV News, where he climbed the ranks from intern to Vice President. Jim grew up in Williamsville, New York, just outside Buffalo, and counts himself a proud graduate of SUNY Geneseo. He currently lives in Los Angeles.