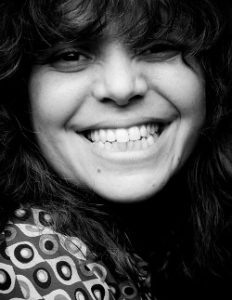 Helfand is an award-winning filmmaker, educator, field-explorer and social entrepreneur and she is as dedicated to building the field as she is to building her own body of work. She co-founded—co-designed, branded and helped launch—Working Films, a national leader in linking non-fiction filmmaking to cutting edge activism and Chicken & Egg Pictures, a hybrid foundation/production entity that takes risks with the women filmmakers they support through strategically timed grants matched by “hands-with” mentorship. She has taught documentary filmmaking at NYU, New School University and the University of Wisconsin in Madison. Her films include the ITVS supported UPRISING Of ’34, which she co-directed with George Stoney and was broadcast on POV in 1995 and the crowd-pleasers: A Healthy Baby Girl, funded by ITVS and broadcast on POV in 1997, and its Sundance award-winning sequel and “toxic comedy” Blue Vinyl. Recipient of a 2007 United States Artists fellowship, Helfand is currently in production on Cooked, a feature documentary exploring extreme heat, poverty and the politics of disaster. By mid to late 2013 she hopes to adopt a baby so she can add “proud mama” to this bio.