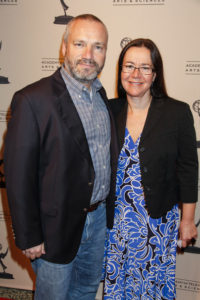 André and Maria Jacquemetton are a husband-and-wife writing team who are dual French and U.S. nationals. Maria Jacquemetton grew up in suburban Boston where she earned an M.S. in Film from Boston University College of Communication. After working in television production in the Boston marketplace, she moved to Los Angeles to pursue a career in screenwriting. She spent two years as an ABC Walt Disney Writing Fellow, and shortly thereafter teamed up with her current writing partner, André Jacquemetton. André Jacquemetton hails from Lyon, France. After earning a degree in Literature and Creative Writing, he landed in Hollywood working in development and production on various feature films before making the transition to writing. The Jacquemettons have managed to work together and stay married for two decades writing for various television drama series, INCLUDING STAR TREK: ENTERPRISE, and six seasons of AMC’s groundbreaking series, MAD MEN. Currently, they are Consulting Producers on Matthew Weiner’s series, THE ROMANOFFS, for Amazon Studios. The Jacquemettons have won numerous awards for their work, including three Emmys, four Writers Guild of America Awards, and two Producers Guild Awards for Producer of the Year.