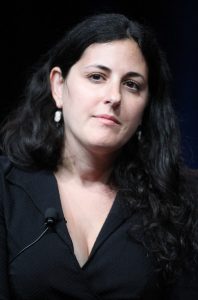 Joanna Rudnick, a documentary filmmaking associate with Kartemquin Films, has been making documentaries for 15 years. She’s passionate about personal documentary, humanizing health and science stories and building audiences to create change through nonfiction film. Joanna’s directorial debut In the Family, a nominee for the 2009 Emmy Award for Outstanding Informational Programming—Long Form, was broadcast nationally on PBS’ P.O.V. as well as internationally in over 12 countries, and was a finalist for the NIHCM Foundation’s Health Care Radio and Television Journalism Award. The film was also used to help advocate for passage of The Genetic Information Nondiscrimination Act and to challenge the validity of gene patents, a case that went to the Supreme Court. Joanna’s most recent release, On Beauty won the Audience Award at the Chicago International Film Festival. In 2014, Joanna followed a cafeteria worker at Google for the Al Jazeera America series Hard Earned, premiering in May 2015. Joanna was the Supervising Producer on HBO’s Crossfire Hurricane, chronicling 50 years of the Rolling Stones. She got her start in documentary at the AMERICAN MASTERS series at WNET where she co-produced Robert Capa in Love and War. Capa premiered at Sundance and was the presenting film for the 2003 Emmy award for Outstanding Nonfiction Series.