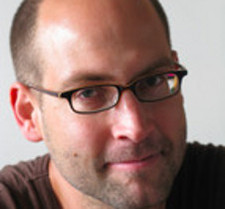 Aaron Douglas Johnston, born and raised in Iowa, studied sociology at Oxford and Yale before finding his way into filmmaking in the Netherlands. In Amsterdam, Aaron studied directing at the Netherlands Film and Television Academy, where he made the Sundance-​selected short Today and Tomorrow, a drama made with and about political asylum seekers living in the Netherlands, and the Dutch-​American romantic drama‚ 9÷11 A Love Story. Aaron’s first feature, Bumblef**k, USA, was dubbed “astutely observed” and, “stealthily compelling”, by Variety in its portrayal of self-​discovery and gay life in small town USA; the film premiered at the prestigious Frameline and Outfest Film Festivals in 2011 and is currently being distributed in several countries.