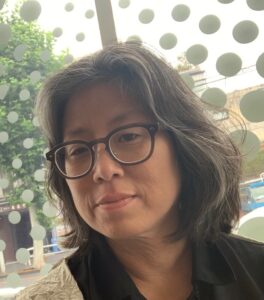 GRACE LEE directed and produced two episodes of the Peabody Award-winning ASIAN AMERICANS series as well as AND SHE COULD BE NEXT, a two-part film about women of color transforming U.S. politics and civic engagement, which was nominated for an NAACP Image Award. She also directed Peabody-winning AMERICAN REVOLUTIONARY: THE EVOLUTION OF GRACE LEE BOGGS, THE GRACE LEE PROJECT, MAKERS: WOMEN IN POLITICS, and the interactive piece K-TOWN’92. She co-founded the Asian American Documentary Network (A-Doc), co-chairs the board of the International Documentary Association, and is Documentary branch member of the Academy of Motion Picture Arts and Sciences.