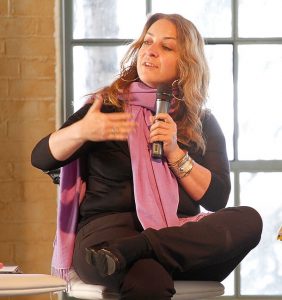 Caroline Libresco is a leading film festival curator, producer, program director, and story consultant with 26 years of experience as an arbiter in the independent film sector. From 2001-2019, she was Senior Programmer for the Sundance Film Festival. She was Founding Director of Sundance Institute’s Catalyst Program, which in its first six years raised $30+ million for 89 projects, including CRIP CAMP, WON’T YOU BE MY NEIGHBOR, CARTEL LAND, THE WITCH, SORRY TO BOTHER YOU, and THE HUNTING GROUND. She was also Founding Director of Sundance Institute’s Women’s Program and Fellowship. Previously, she was an executive at Independent Television Service (ITVS), San Francisco Film Festival’s senior publicist, and associate director of the San Francisco Jewish Film Festival. Among her projects as creative producer are FANCI’S PERSUASION, starring Justin Vivian Bond; Tribeca FF Jury Prize-winner, SUNSET STORY; and Peabody Award-winner AMERICAN REVOLUTIONARY: THE EVOLUTION OF GRACE LEE BOGGS. She executive produced DISCLOSURE, which premiered at the 2020 Sundance Film Festival. Caroline is currently Senior Advisor to the Thessaloniki Film Festival, and is actively producing projects through her company Gabbert/Libresco Projects. She is a member of AMPAS, the IDA Board, and holds a B.A. from Oberlin College, an M.A. in History of Religion from Harvard University and an M.F.A. from UCLA Film School.