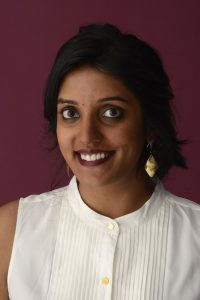 Meera Menon is a writer, director, and editor.  In 2013, her feature directorial debut, Farah Goes Bang, premiered at the Tribeca Film Festival; as the film’s co-writer/director, Meera was awarded the inaugural Nora Ephron Prize for a groundbreaking woman filmmaker by Tribeca and Vogue. That year, Meera was also showcased as one of Glamour Magazine’s “35 women under 35 running Hollywood.” More recently, she was selected to be a fellow at 20th Century Fox’s Global Directors Initiative. Her second feature, Broad Street Pictures female driven Wall Street drama Equity, starring Anna Gunn and James Purefoy, premiered at the 2016 Sundance Film Festival and was released by Sony Pictures Classics in July 2016. She received her BA in English and Art History from Columbia University, and her MFA from USC’s School of Cinematic Arts. In addition to her filmmaking career, Meera has worked as a curator for contemporary film and video art festivals in Paris, Miami, and New York; she curated an exhibition of over 100 independent artists at New York’s legendary Chelsea Hotel in 2008. She and her husband, cinematographer Paul Gleason, work and live in Los Angeles under their banner Elephant Shoe Pictures.