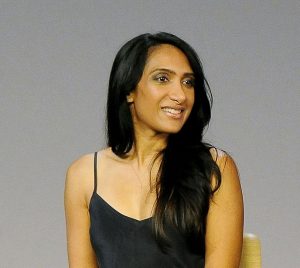 Emmy-nominated, Sundance filmmaker Geeta V. Patel is known for her emotional, form-pushing, and nontraditional style in both comedy and drama.

Geeta and her brother, Ravi V. Patel, were nominated for an Emmy for their film Meet The Patels. The film premiered theatrically in 2015 and was Executive Produced by Academy Award Winner Geralyn Dreyfous. Geeta served as cinematographer, writer, producer, editor, and director of the film, alongside her brother.

Geeta made her directorial debut with the Sundance/ITVS film, Project Kashmir, a war thriller which led to directing fellowships at both the Sundance and Tribeca Institutes.

In television, Geeta has directed both comedy and drama, including Dead to Me, Superstore, Atypical, The Magicians, and Marvel’s The Runaways. Previously, she directed second-unit on the Wachowski’s Netflix series Sense 8.

Geeta began her career as an Associate Screenwriter on big-budget studio films in all stages, ranging from original work to production re-writes. She has worked with Disney, Universal Pictures, ABC, NBC, and Twentieth Century Fox on a range of films including The Fast and the Furious and Blue Crush.

A graduate in Comparative Area Studies at Duke University, Geeta’s background in languages and global human geography, along with her interest in action/dance choreography, inform her work. While studying in Berlin, filmmaker Anthony Minghella inspired her to pursue a career in storytelling.

Geeta has been a Visiting Artist in Belarus, Turkey, Egypt, Bosnia and Herzegovina, and Japan as part of the U.S. State Department’s film diplomacy program.