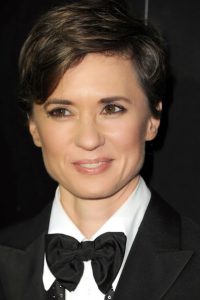 Kimberly Peirce staked her place as a director of singular vision and craft with her unflinching debut feature, Boys Don’t Cry, which earned numerous honors including the Best Actress Oscar for the film’s star, Hilary Swank. In 2013 Peirce directed Carrie, an American Cinderella horror tale of dreams, desire, sexuality, bullying, superpowers and revenge. Most recently, Kimberly has directed episodes of the acclaimed shows American Crime, Turn, Halt And Catch Fire, and Amazon’s forthcoming I Love Dick. Kimberly is an Executive Producer of the upcoming A&E TV show Impact. Kimberly received her BA from the University of Chicago, her MFA from Columbia University, is a graduate of the Sundance Institute’s Writing, Directing and Producing Film Labs. A tireless activist, she serves on the Executive Board, the Western Council, the Diversity and the Negotiating Committee of the Director’s Guild of America, and the Academy of Motion Picture Arts and Sciences. She spoke at the Women’s March in Park City and is one of the 1 of 52 founding members of REFRAME, Hollywood, Sundance and Women in Film’s industry-wide effort to end the systemic discrimination against women working behind and in front of the camera, a cause she is active on behalf of in many of other venues.