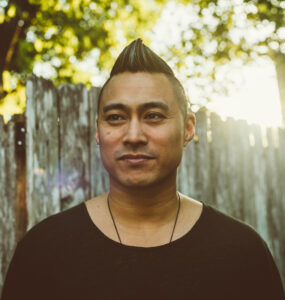 Named one of Out Magazine’s “Out 100”, PJ Raval is a queer, first generation Filipino American filmmaker whose credits include TRINIDAD (Showtime), BEFORE YOU KNOW IT (PBS), and CALL HER GANDA which broadcast on POV (PBS) in 2019 and won the 2020 NLGJA Association of LGBTQ Journalists “Excellence in Documentary Award” and was nominated for a Philippines Academy Award for Best Documentary and a GLAAD Media Award.

PJ is a co-founder of the queer transmedia arts organization OUTsider, and is an Associate Professor at the University of Texas at Austin. He serves on the leadership team of the Asian American Documentary Network (A-Doc) and is a Soros Justice Fellow, a Guggenheim Fellow, a member of the Producers Guild of America and Academy of Motion Pictures Arts and Sciences.