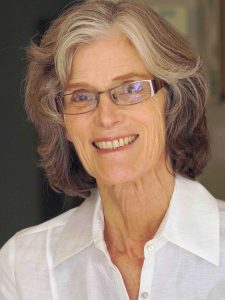 Kristine Samuelson is a documentary essayist; her films (made in collaboration with John Haptas) include Tokyo Waka, Barn Dance, The Days and The Hours, Riding the Tiger, The World as We Know It, Empire of the Moon, and Wrong Place, Wrong Time. These works have been screened at festivals worldwide, from Sundance and San Francisco to London, Mannheim, São Paulo, India, Australia, and South Korea and have appeared on PBS and at museums including New York MOMA. Their most recent film, Life Overtakes Me, premiered at Sundance, won Audience Awards at the Full Frame and Chicago Critics Film Festivals, was nominated for an Academy Award in 2020, and is currently streaming on Netflix. She is also the Edward Crossett Emerita Professor of Humanistic Studies at Stanford University, where she taught in the Documentary Film and Video M.F.A. Program for thirty years. Professor Samuelson is a member of the Academy of Motion Picture Arts and Sciences. Her work has been supported by artist fellowships from the Cité Internationale des Arts in Paris, the Victoria College of Art in Melbourne, and the Japan-U.S. Friendship Commission. Samuelson has also served on the Board of the Independent Television Service and has taught workshops in Nepal, Zambia, Ghana, South Africa, Vietnam and Australia.