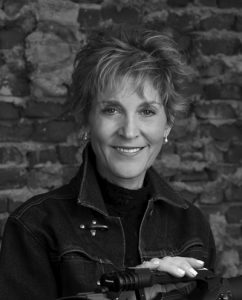 Nancy Schreiber ASC is an award-winning cinematographer based in both New York and Los Angeles. She was the fourth woman ever voted into membership into the prestigious American Society of Cinematographers, and recently received the 2017 ASC President’s Award, the first woman to receive this honor. Schreiber was winner of the Best Dramatic Cinematography Award at Sundance for November. She also shared Best Cinematography at Sundance for My America…Or Honk If You Love Buddah, and garnered an Emmy nomination for cinematography on the acclaimed Celluloid Closet for HBO. In addition, Schreiber was nominated for an Independent Spirit Award for Chain of Desire, was Kodak’s mentor of the year, and was recognized by Variety as one of 10 DPs to watch. In addition to filming features and documentaries, Schreiber’s television work was recently seen on ABC’s The Family with Joan Allen, and the FX show, Better Things, staring Pamela Adlon, produced by Louie C K. Schreiber taught advanced cinematography at the American Film Institute in 2010-2011 and has guest lectured at film schools around the world. She also served on the ASC board for seven years, was on the Women In Film Foundation Board, and is a member of the Academy of Motion Picture Arts and Sciences.