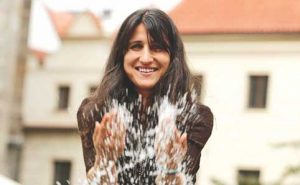 Sangita focuses on transmedia, civics, participation, the civic imagination and cross cultural dialogue. She leads engaging workshops on transmedia storytelling for social change and leads participants through every step of developing and rolling out a project across various media platforms. Sangita’s recent work has focused on storytelling and surveillance among American Muslim youth, the Kony2012 campaign, and global Bollywood. She is one of the authors of By Any Media Necessary: The New Activism of Youth, a book published in May 2016. Her creative work has been presented in academic and creative venues around the world including the Schaubuehne (Berlin), the Other Festival (Chennai), the EBS International Documentary Festival (Seoul).

A Czech-Nepalese child of the final years of the Cold War, Sangita grew up between Prague and Kathmandu. Her childhood was shaped by hostile visa policies and travel restrictions. In reaction, she has since taken the opportunity to call many cities home (including Brussels, London, Kandy, Ahmedabad, Berlin). She relishes any opportunity to draw on her mixed race/cultural chameleon-like background and routinely keeps track of multiple times zones. She is still most comfortable when her carry-on is packed and believes home is a place where there is someone waiting for you; right now that is Los Angeles where she is currently the Director of Henry Jenkins’ Civic Paths Group at the University of Southern California.