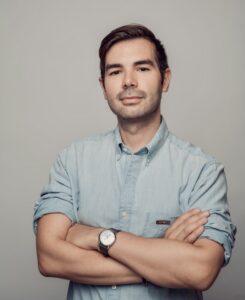 Danny Tolli is a first-generation Argentinian-American TV writer-producer who hails from Queens, NY. At present he is a Co-Executive Producer on a forthcoming Peacock series. Danny has written for ROSWELL, NM (Warner Bros), Shondaland’s THE CATCH (ABC), and STALKER (CBS). He is currently in development with 20th Century TV and has created pilots for Freeform and Netflix. He is the former Co-Chair of the WGAW’s Latinx Writers Committee and serves on the Guild’s Inclusion & Equity Group, as well as the steering committee of the Think Tank For Inclusion & Equity. Danny is a graduate of NYU’s Tisch School of the Arts and the NHMC’s Television Writing Fellowship, and currently lives in Los Angeles.