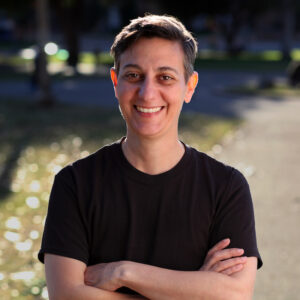 Juli Vizza is an Emmy Award winning editor and producer with two decades of experience in both fiction and non-fiction filmmaking. Their films have premiered at Sundance, Berlin, and Tribeca and have aired on PBS, Showtime, and The History Channel, among others.

They are currently editing LET THE CANARY SING, a documentary feature about Cyndi Lauper. Other recent credits include TRUE BELIEVER, a feature documentary exploring the politicization of Evangelical Christians; and AND SHE COULD BE NEXT, a 2-part series about women of color transforming American politics from the ground up. Juli was awarded the 2021 Sundance Adobe Mentorship Award for Editing in Non Fiction.