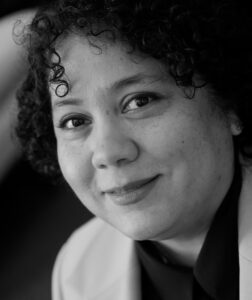 Leola Calzolai-Stewart is the director of THE AMERICAN DIPLOMAT. She brings over 15 years experience in documentary film and video and is co-founder of the Virginia- based production company, FLOWSTATE Films. THE AMERICAN DIPLOMAT, Calzolai- Stewart’s directorial debut, was awarded two grants from the National Endowment for the Humanities and a development grant from the Virginia Foundation for the Humanities. The project was selected as part of Black Public Media’s 2019 360 Incubator+ program and Leola is one of Firelight Media’s Documentary Lab Fellows for 2019-21. Calzolai-Stewart co-produced and edited the feature documentary, THE LAST SONG BEFORE THE WAR, distributed by Kino Smith, and edited the feature documentary DEAR WALMART which premiered in May 2019 as part of FilmFest DC’s Justice Matters competition and is distributed by Virgil Films. She has an MA in Law and Diplomacy from Tufts University’s Fletcher School and a BA in international affairs from the University of California, Davis. Calzolai- Stewart studied film at the Tshwane Institute of Technology in Pretoria, South Africa.