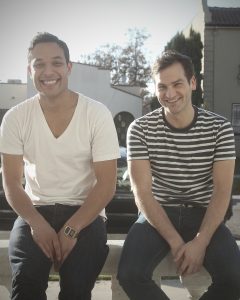 Dan Lindsay and TJ Martin are the co-directors/co-editors/co-cinematographers of the feature length documentary, Undefeated. The film premiered at the 2011 SXSW film festival, where it was purchased by The Weinstein Company for North American Distribution. In 2012, the film won the Academy Award for Best Feature Documentary. The film has also been honored with a Critics’ Choice Award nomination for Best Documentary, as well as winning numerous festival awards including the Special Jury Prize at DOC NYC and Audience Awards at Indie Memphis and the Chicago Independent Film Festival. Undefeated also had the honor of making its international debut at The Toronto International Film Festival.

Lindsay and Martin met in 2007 while working on the feature length documentary, Last Cup. The film is a humorous look at the largest beer-pong tournament in the world. The film premiered at the 2008 Cinevegas Film Festival and had its broadcast premiere on Spike TV in the fall of 2011. The film was distributed by Virgil Films under the Morgan Spurlock Presents banner. Sports Illustrated included it in their 2011 Year in Sports Media, calling it a “winning documentary.”  Lindsay and Martin have also produced, directed and edited several short-form pieces across various platforms and genres. They are currently finishing a short documentary entitled My Favorite Picture of You. The filmmakers both got their start by making independent documentaries. Lindsay’s first film as a director was the short documentary Why US?, which explores the roots of the 9/11 attack on the United States. The film was purchased by The Discovery Network and was broadcast in 2003. Martin’s first film, A Day of Hype in America, follows four Americans over the course of 24 hours as they prepare for the transition into the new Millennium. The film won the best documentary award at the Rhode Island International Film Festival in 2003.