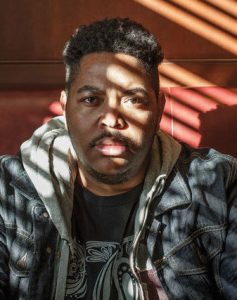 Houston native, Darius Clark Monroe graduated with honors with a B.A. from the University of Houston, and an M.F.A. from New York University’s Tisch School of the Arts, where he won the National Board of Review Award and the Wasserman Award for his third year film Midway. Midway went on to screen at over 60 international film festivals and has won numerous awards including the HBO Short Film Award and Warner Bros. Filmmaker Award. In 2008, Midway made its cable television debut on HBO and Cinemax. After Midway, Monroe wrote, produced, and directed the acclaimed short film Train, which premiered at the Palm Springs International Shortfest. Train went on to screen at 50 international film festivals and was selected as a Vimeo Staff Pick. Monroe also wrote, produced and directed the short film Slow, which premiered at OUTFEST 2011 and online simultaneously via Vimeo (going viral instantly). Slow has screened at nearly 40 international film festivals, winning numerous awards, including another HBO Short Film Award and Best LGBT Short Film of 2011 prize. In March of 2014, Monroe world premiered his feature length documentary Evolution of a Criminal at SXSW. Evolution of a Criminal has screened at over 100 international film festivals, winning numerous awards including the International Documentary Association Emerging Filmmaker Award and Grand Jury prizes at Full Frame, Docuwest, and Hot Springs Documentary Film Festival. “Its images, its shape, its tone, and its implications make it a terrific movie, as well as the birth of an artist,” described The New Yorker. The film went on to be nominated for an Independent Spirit Award Truer Than Fiction grant and Cinema Eye Honor. In 2015, Evolution of a Criminal made its nationwide television broadcast debut on Independent Lens (PBS).